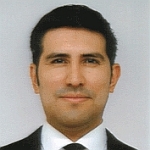 Jose Gomez-Tames is Research Associate Professor in Nagoya Institute of Technology. His research focuses on computational bioelectromagnetics, neural engineering, and their biomedical applications. He received the B.S. degree in electronics engineering from the Institute of Technology of Costa Rica, Cartago, Costa Rica, in 2007 and the M.S and Ph.D. degrees in medical system engineering from Chiba University, Chiba, Japan, in 2012 and 2015. He was a Research Fellow of the Japan Society for the Promotion of Science in 2015. Since 2016, he has been a Research Assistant Professor and subsequently Research Associate Professor in Nagoya Institute of Technology. He is working group chairman of the IEEE International Committee on Electromagnetic Safety from 2017. Dr. Gomez-Tames was appointed a Member of the ICNIRP Scientific Expert Group (SEG) in 2018.