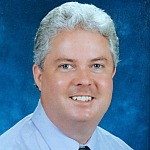 John Hanifin is currently a research assistant professor and laboratory director of the Light Research Program at Thomas Jefferson University. He completed his doctoral degree in Biochemical Sciences from the University of Surrey in the U.K.  He has served as project manager for NIH and NASA sponsored research studies and has served on several United States Department of Energy panels examining how solid state lighting can impact human physiology. His research examines the effects of light on the brain, hormones and behavior in humans.  He has contributed to studies of neuroendocrine and circadian regulation relative to light intensity and wavelength.  Using the techniques of radioimmunoassay, performance testing and photobiology, he has explored polychromatic light mixtures of short wavelength light for circadian, neuroendocrine and neurobehavioral effects in humans and has published extensively. Current studies include elucidating the action spectrum of melatonin regulation, studying the influence of light on tumor progression, and testing new smart lighting devices for hospitals and roadways as well as space applications on the International Space Station. John Hanifin was elected Member of the ICNIRP Scientific Expert Group (SEG) in May 2018.