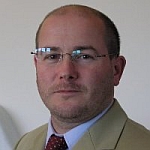 Karl Schulmeister graduated from Univ. Techn. Vienna with a Dipl-Ing in physics in 1992 and from Trinity College Dublin in 1994 with an MSc, and in 2001 received his PhD in biophysics on research on the risk for retinal injury from lasers. Since 1994 he is head of the „Laser, LED and Lamp Safety“ group at Seibersdorf Laboratories in Austria. His team has developed computer and ex-vivo models for laser induced ocular and skin injury threshold prediction that served to characterise the spot size and multiple pulse dependence of thermal injury. He is co-author of the hand-book „Laser Safety“ and about 100 scientific publications. Dr. Schulmeister is the technical secretary at the IEC TC76 Working Group on laser and optical radiation safety standards. He is member of ANSI Z136 Laser Safety Committee on Bioeffects and since 2002 Associate Director of Division 6 “Photobiology” of CIE, the International Commission on Illumination. He has served on ICNIRP Standing Committee on Optical Radiation (SCIV) from 2003-2012 and on the Main Commission from 2008-2012. He was appointed a Member of the ICNIRP Scientific Expert Group (SEG) in March 2013.