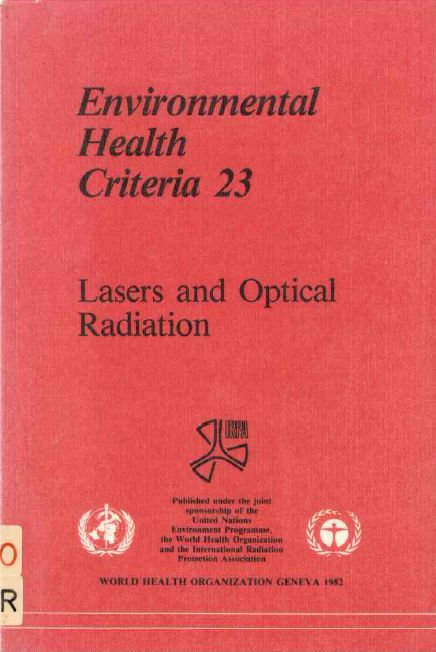 Excerpt of the preface: "Modern advances in science and technology have changed man's environment, introducing new factors which, besides their intended beneficial uses, may also have untoward side effects.  Both the general public and health authorities are aware of the dangers ofpollution by chemicals, ionizing radiation, and noise, and of the need to take appropriate steps for effective control.  The rapid growth of electro-optics and laser technology and the increasing use of electro-optical devices and lasers, including optical scanning equipment, high-intensity lamps, welding arcs, and UV photo-curing equipment, alignment lasers, and medical lasers have increased the possibility of human exposure to optical radiation and, at the same time, concern about health effects.

This document provides information on the physical aspects of electromagnetic radiation in the optical spectrum, within the wavelength range of 100 nm - 1 mm.  Optical radiation includes ultraviolet radiation (UVR) from approximately 100 nm to 400 nm, light (visible radiation) from approximately 400 nm to 760 nm, and infrared radiation from approximately 760 nm to 1 mm.  Each of these spectral regions can be arbitrarily divided into subregions. Lasers are capable of producing optical radiation in all three major divisions of the optical spectrum.  A brief survey of lasers and other man-made sources of optical radiation is presented.  It is known that optical radiation interacts with biological systems and a summary of knowledge on biological effects and health aspects has been included in this document.  In a few countries, concern about occupational and public health aspects has led to the development of radiation protection guides and the establishment of exposure limits for laser radiation and UVR.  Several countries are considering the introduction of recommendations or legislation concerned with protection against untoward effects from non-ionizing radiation in the optical spectrum.  In others, efforts are being made to revise and update existing standards. It is hoped that this criteria document may provide useful information for the development, at a national level, of protection measures against non-ionizing radiation."

International NIR Workshop Due to the COVID-19 crisis, the ICNIRP NIR Workshop, Seoul, Korea is cancelled. Other arrangements will be planned and information on those will follow. Thank you for your interest.